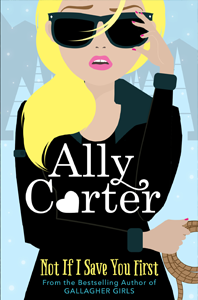 Title: Not If I Save You First

Someday I’m going to write a book: How Not to Die in Alaska – A Girl’s Guide to Fashionable Survival.

I bet you don’t know that a hair pin can make an excellent fishing hook. You may think you can use just any kind of mud for mud masks, but trust me, you CAN’T! In a pinch, nothing starts a fire like nail polish remover. Alaska is tough. You might know this, if you ever replied to my letters.

After Maddie’s Secret Service dad takes a bullet for the president, he takes Maddie somewhere he thinks they’ll be safe – far away from the White House and the president’s son, Logan.

But when Logan comes to Alaska, so does the danger.

If there’s one thing Alaska has taught Maddie, it’s how to survive. And now her best friend’s life depends on it …

Life is pretty good for 10 year old Maddie Manchester; her father is head of The President’s Secret Service detail; and she is best friends with his son. Maddie and Logan spend their childhood exploring The White House until one day everything changes – There’s a kidnap attempt on the First Lady and Maddie’s father is injured. After he leaves hospital he quits the Secret Service and leaves Washington behind him, whisking Maddie away to the wilds of Alaska. Despite writing to Logan regularly Maddie never hears back from him, until six years later when The President has had enough of his wayward son and send him out to his best friend in the wilds of Alaska. Maddie isn’t so keen to see her former friend arrive and from then things just go from bad to worse…

Not If I Save You First is the first Ally Carter book I’ve read but after reading it I’m quite certain it won’t be my last. I genuinely can’t think of anything I disliked about Not If I Save You First; Ally kicks off the action with the kidnap attempt and from then on it doesn’t really stop until the last page! Ally does a fantastic job with the pacing, keeping the action ramped up all the way through the novel without it feeling like too much is being thrown at the reader.

I also really enjoyed both central character’s within the book. I loved Maddie, she felt like such a well rounded character. She certainly had a slightly unique background being the daughter of a secret service agent, and perhaps had a slightly unique set of skills, but she was certainly fierce! I really loved the fact that she was the one doing the rescuing rather than being rescued! What also came across was her genuine upset and confusion at the lack of contact from Logan, and then her shock at seeing him again; I found her trying to adapt to the fact he’s no longer the small 10 year old boy but a tall broad and attractive 16 year old to be particularly realistic. Logan was also a really likeable character, as the story continues their relationship slowly begins to rebuild itself, Logan is equally unsure of his feelings now he’s faced with an older Maddie, but I certainly enjoyed the fact that as much as he tried to protect Maddie, it was more often than not Maddie keeping the pair of them alive.

Absolutely this was a really fun read, great characters and an interesting plot. I really hope this isn’t the last we’ll hear about Maddie and Logan!

Ally Carter writes books about spies, thieves, and teenagers. She is the New York Times Best-selling author of the Gallagher Girls, Heist Society, and Embassy Row series. Her books have been published all over the world, in over twenty languages.

I had some long dates on my Gousto box this week so I’m using up some leftovers from the fridge. Loosely based on a Gousto meal it’s a chicken and leek gnocchi bake, with a little mustard and cream cheese in the mix and topped with panko breadcrumbs and cheese
It’s fakeaway night! I’m eating @goustocooking’s take on one of my Chinese takeaway go tos. Salt & pepper chicken with egg fried rice!
Finally in exciting post today this copy of #Hexed by @JuliaTuffs arrived from @teambkmrk!
@wonderlandbookshop also has my bookish requirements covered! My signed and personalised copy of @ldlapinski’s Strangeworlds sequel arrived this morning! Weekend reading sorted!
My feed is filled with people so excited that UK bookshops are back open. Spare a thought for those of us north of the border, we’ve another 10 days to wait before ours reopen!
Tonight’s inspiration has come all the way from South America. It’s Brazilian chicken and coriander curry!