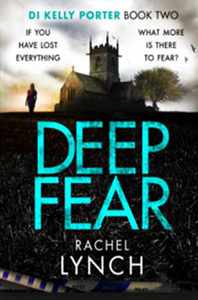 DI Kelly Porter is back.

But will this new case push her beyond her limits?

On a peaceful summer’s morning in the Lake District, a woman’s body is discovered outside a church. She’s been murdered and a brutal, symbolic act performed on her corpse.

DI Kelly Porter is in charge of the team investigating the crime, and is determined to bring the killer to justice. But as more deaths occur it is clear this is the work of a disturbed, dangerous and determined individual. Can Kelly put the puzzle pieces together before the danger comes closer to home?

At the beginning of the year the first book in the DI Porter series was released by Canelo and I was lucky enough to be on the blog tour for it, you’ll find a link to it down below. I really fell in love with DI Kelly Porter so I cannot begin to explain how excited I was when I saw Deep Fear appear on Netgalley!

Following an early morning swim Conrad Walker heads for the local village church to spend a moment at his wife’s grave as he does every day, but the day is not a normal day, rather than waiting with him, his dog Nugget races across the road and into the graveyard, as Conrad follows the reason for Nugget’s unusual behaviour becomes clear, under the oak tree is the naked body of a dead woman.

DI Kelly Porter is the detective in charge of the case and as the post-mortem is completed a calling card found suggests that this may not be a straightforward case, Kelly begins to feel the pressure as more bodies are found, and before Kelly can solve the case it takes a deeply personal turn.

I found the case which formed the main plot to be absolutely fascinating. From the moment Nugget found that first body Rachel had me hooked. Taking in each twist and turn, from the first post-mortem to the discovery of each subsequent body I was frantically turning the pages eager to find out what was coming next, wracking my brain for any clues I might have missed and to try to work out what linked the victims together. The plot built wonderfully to an incredibly exciting climax and ending.

Alongside the case we were also treated to further development of Kelly’s character, while she is still not getting on with her sister, we see her dealing with a mother who is sick, and at the same time setting down her own roots back in the Lake District and buying her own home. I also enjoyed the development of Kelly’s relationships with others around her, especially Johnny. We also learnt a little more about some of Kelly’s team, I felt her DS really came into her own towards the end of the book, and her DC Emma also shone, able to bring some expertise from her days studying to an English degree to the case.

Like the first book in the series, Deep Fear doesn’t shy away from graphic descriptions of the victims’ bodies and post-mortems, while Deep Fear has a beautiful backdrop in its Lake setting a cosy crime it is not! Parts are dark, not all the characters are likable but this story was right up my street! I think when you start a series and really love the novel you’re always a little worried that the second book might not live up to the first. I’m pleased to say there are no such issues with Deep Fear, if anything it’s slightly better than Dark Game, I can’t recommend it enough and I’m already looking forward to my next adventure with DI Kelly Porter!

Other books in the DI Porter series – Via Goodreads

Rachel Lynch grew up in Cumbria and the lakes and fells are never far away from her. London pulled her away to teach History and marry an Army Officer, whom she followed around the globe for thirteen years.

A change of career after children led to personal training and sports therapy, but writing was always the overwhelming force driving the future. The human capacity for compassion as well as its descent into the brutal and murky world of crime are fundamental to her work.