The first in an exciting new series from the author of THE SILENCE OF THE SEA, winner of the 2015 Petrona Award for best Scandinavian Crime Novel.

The murder was meant as a punishment – but what sin could justify the method?

The only person who might have answers is the victim’s seven-year-old daughter, found hiding in the room where her mother died. And she’s not talking.

Newly promoted, out of his depth, detective Huldar turns to Freyja and the Children’s House for their expertise with traumatised young people. Freyja, who distrusts the police in general and Huldar in particular, isn’t best pleased. But she’s determined to keep little Margret safe.

It may prove tricky. The killer is leaving them strange clues: warnings in text messages, sums scribbled on bits of paper, numbers broadcast on the radio. He’s telling a dark and secret story – but how can they crack the code? And if they do, will they be next?

I first thought this book looked interesting and requested it on NetGalley last year, but then life got in the way and it sat shamefully unread on my iPad. Then last month Hodder & Stoughton contacted me and asked if I would like to take part in a blog tour to coincide with the paperback release. I jumped at the opportunity and settled down to read The Legacy, and right from the beginning I questioned why I hadn’t read in sooner!

The Legacy begins with a prologue set in the late 1980s with a group of social workers having to make a difficult decision about the best way to deal with three young siblings, should they stay together in care or should they be split up in the hopes that the youngest girl at least stands the chance of adoption and a family?

Switching to the present day a woman is brutally murdered in her own home, a newly promoted detective finds himself leading the murder enquiry and when his only witness is the woman’s young daughter, who was hidden under the bed at the time of her mother’s murder, and who is too traumatised to talk the psychologists at The Children’s House are brought in to help.

The plot of The Legacy is complex; the murders were definitely a first for me and I’ve read a lot of crime fiction! There’s no doubt that they were brutal but not described in particularly graphic detail, believe me your brain will fill in the gaps. With the addition of coded messages being received by a seemingly unrelated third party and the information gained from Margret Yrsa had so many different scenarios running through my head as I tried to figure out how the prologue and the present day were connected, none of my guesses were right!

The two central characters within the story really grew on me as the book went on.

Huldar is the newly promoted detective in charge of the murder case, a series of corruption allegations sidelining a number of more senior members of staff Huldar is perhaps not quite ready for the promotion but sets to work anyway. It would be fair to say that Huldar is a flawed detective, and his character won’t be completely unfamiliar to any crime ready, he smokes, although he’s trying to give up, and he doesn’t really do personal relationships, preferring to play the field, although that leads to complications of its own. The fact that Huldar is the type of character we’ve seen before doesn’t take away from the story though, his past indiscretions add an interesting twist to some of the relationships within the novel.

Freyja is a child psychologist based at The Children’s House who is brought into the investigation to help deal with the victim’s young daughter, trying to work through the girl’s trauma and gather information that will help catch her mother’s killer. I really liked Freyja, she’s good at her job and clearly cares about the children she helps, she also seems to have an interesting backstory, with her protective brother currently in prison. I’m looking forward to finding out more about her in future books.

Originally written in Icelandic the story has been wonderfully translated by Victoria Cribb. I was a little worried about how I’d find it as I’ve read a few translated stories and they’ve felt a little stilted, and as though they’d lost something in translation but not this story, it was engaging and gripping from beginning to end!

Absolutely! I thought it was a great read although I may never be able to look at certain household appliances in the same way again! This may have been my first book by Yrsa Sigurðardóttir but it certainly won’t be my last! I’m keen to kind out what’s next for Freyja and Huldar and I’m looking forward to getting my hands on The Reckoning once it’s released!

Goodreads link to other books in the series

As always if you’ve read the book let me know what you thought! If you’ve not read it yet will my review convince you to pick it up? Be sure to check out some of the other people on the blog tour! 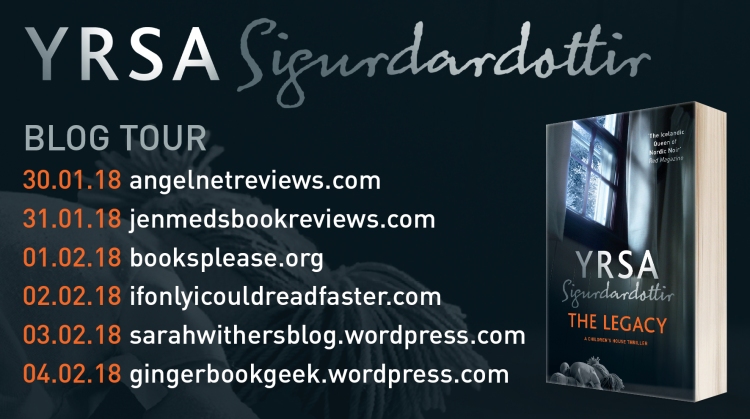 One thought on “Sarah Reviews… The Legacy by Yrsa Sigurðardóttir”