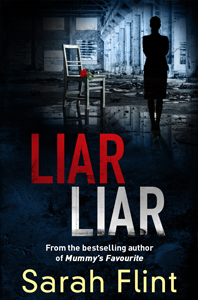 A faithful dog lies wounded beside the mutilated body of its owner.

A woman is discovered bound and gagged, dead in her own bed.

Both are police officers.

Lies and accusations abound but who is behind the murders and why are the victims being targeted?

Charlie, Hunter and the team must find the killer targeting their own before another body is found.

Starting with a brief throwback chapter Liar, Liar promptly then throws the reader into the present day action with the bodies of three police officers found in quick succession. The plot is gripping and well paced as the author pulls the reader through the chapters, despite reading it into the late evening I frequently found myself thinking just one more chapter I need to know what happens… and I must admit I was kept guessing through most of the book.

Liar, Liar is not for the faint hearted, the killings are brutal and Sarah Flint doesn’t shy away from creating some vivid imagery. However for me that just added the the realism of the story, I felt the fact Sarah was a police officer herself really shone through, with characters working through rest days and doing overtime, certain forensic tests taking time to produce results unlike the immediate results TV shows like CSI have lead us to think happens.

I also really connected with the characters, with DC Charlotte Stafford in particular. Charlie came across as a dedicated conscientious police officer, and there’s enough of her history contained within this story for the reader to understand why she does the job she does.

However throughout the book there are references to a previous case that went wrong and I think I would have benefitted from reading the previous two books in the series first – at points I struggled to understand Hunter’s issues, and although it was explained by the end of the book I think if I’d read the previous book/s I would have understood where is actions were coming from. There is also clearly a back story with Charlie and the character Ben that I didn’t have and I think knowing it would have given me a better perspective on their relationship.

Yes! I really enjoyed this one, I think I would recommend reading the two previous books in the series to get the most out of it, but it was a gripping read for me even without having the additional background information on the characters