Evening all, As normal I’m linking up with the weekly meme hosted by Sam over at Taking on a World of Words.

What are you currently reading?

Dream Job by Janet Garber – The Irregular by H.B. Lyle

These are still sitting on my shelf – I did make a little progress with Dream Job on my commute today, but only because I left the book I wanted to read at home and I didn’t want to start a new ebook. Still not loving it to be honest!

The Silkworm by Robert Galbraith 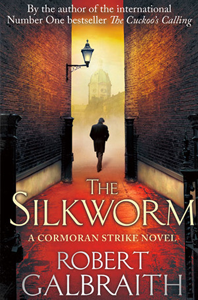 When novelist Owen Quine goes missing, his wife calls in private detective Cormoran Strike. At first, she just thinks he has gone off by himself for a few days – as he has done before – and she wants Strike to find him and bring him home.

But as Strike investigates, it becomes clear that there is more to Quine’s disappearance than his wife realises. The novelist has just completed a manuscript featuring poisonous pen-portraits of almost everyone he knows. If the novel were published it would ruin lives – so there are a lot of people who might want to silence him.

And when Quine is found brutally murdered in bizarre circumstances, it becomes a race against time to understand the motivation of a ruthless killer, a killer unlike any he has encountered before…

I’ve started the audio book on this one but I have the hardback sitting on my shelf and I might switch over to it, nothing wrong with the narration but I tend to listen in the evenings, and I woke up to discover I’d missed someone die, so I’ll have to rewind. At least if I’m reading I can’t doze off and miss anything!

I’m also finishing off my Round Robin book to send on this week!

What did you recently finish reading?

Reported Missing – Interesting, slightly different take on a thriller, I enjoyed it though! It’s in my list of reviews to type up this weekend!

What do you think you’ll read next?

I’m taking part in a few blog tours at the end of August and beginning of September so I’ve got those books to read. Good Friday by Lynda La Plante, Scorn by Paul Hoffman, I Know Where She Is by S.B. Caves and Fire Lines by Cara Thurlbourn. Also hoping to pick up some of the YA I bought last month!

In other news I passed the CIPS exam I sat in May (yay!) and Amazon’s 3 selected paperbacks for £10 deal is back on, is there anything I just NEED to buy?

Let me know what you’re reading in the comments!