Good morning everyone! Today I’m sharing the last of this week’s, Next Month We’re Loving…, today’s post was written by Lou from Book Murmuration.

From his seat in the tiny aeroplane, Fred watches as the mysteries of the Amazon jungle pass by below him. He has always dreamed of becoming an explorer, of making history and of reading his name amongst the lists of great discoveries. If only he could land and look about him.

As the plane crashes into the canopy, Fred is suddenly left without a choice. He and the three other children may be alive, but the jungle is a vast, untamed place. With no hope of rescue, the chance of getting home feels impossibly small.

Why I can’t Wait to Read the Explorer:

All narratives are ‘castaway’ narratives. A protagonist is taken out of their real world, and learns about themselves as the result of an adventure. Whether they literally leave their world, or encounter something new, most of a narrative is spent in a state other than their day-to-day life. Castaway narratives are instantly relatable because we know the rules – the protagonist must change as a result of their experience. I love Castaway narratives. Kensuke’s Kingdom is an old favourite, and I am currently reading Where the World Ends.

There is a danger with exotic settings that the characters will spend a long time doing those things castaways do – making shelters, building fires, writing messages in the sand – for no reason. In the best stories, the setting is part of the story. Katherine Rundell is now an established author, whose books have met with acclaim. It is great to see familiar ideas given new life by talented writers.

The book is set in the early 1900s. Rundell did a beautiful job of this era in Rooftoppers. I enjoyed the exploration of gender conventions. It seems old-fashioned to the reader that girls are expected to squash their ribs in a corset. This raises questions about the modern day: should women be forced to wear crippling shoes, for example? Talking about the strange things people used to believe can be a great way of opening conversation about the things people still believe or allow. I’m looking forward to The Explorer, with its cast of boys and girls. The Jungle will remove them from the conventions of their society. I wonder how this will change gender relations?

The Book looks likes a beautiful object: I love the cover, and the ebook I have from netgalley suggests there will be illustrations around the text. This is super-exciting. I am an advocate for illustration in Middle Grade novels. Let’s put the days of ‘outgrowing’ illustration behind us. 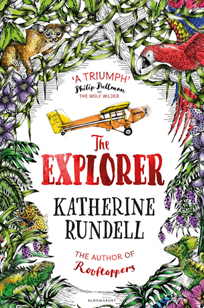 Thank you so much to Lou for sharing her post with me!

Have you been looking forward to this book? Has Lou’s post made you add in to your TBR? Let me know in the comments below!

If you’d like to take part in Next Month We’re Loving… Get in touch!

One thought on “Next Month We’re Loving… The Explorer”