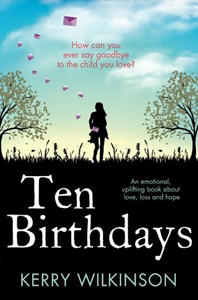 She should be blowing out candles and opening presents – but hers falls on the type of heart-wrenching, agonising anniversary she would far rather forget.

The worst day of them all. The day her mother died.

But this year is special because the person she misses most in the world has left her a set of letters, one for each of her next ten birthdays.

As Poppy opens them year by year, she discovers that no matter how tough life gets, her mum will always be by her side, guiding her along the way.

I absolutely loved the concept of this book, each chapter focuses on one year, the period around her birthday, the the next letter from her mum. They style allows Kerry to cover a large period of Poppy’s life in a relatively short book, without leaving the reader feeling short changed or as though the book was rushed. Over the ten years we get to see how Poppy develops as she ages. I also really enjoyed, and identified with, the way the friendship between the three central changed over the years, the honesty with which Kerry portrays the way people and friendships change, unfortunately being the best of friends at 15 doesn’t always mean you still will be at 25.

I also really enjoyed reading the letter’s from Poppy’s mum, they were a wonderful mix of back story and wise words.

I would, it was a quick and enjoyable read, it might not be Kerry’s usual style of book but well worth curling up with one afternoon.