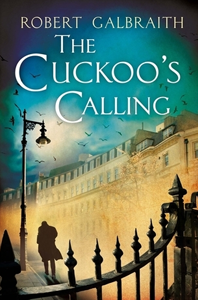 After losing his leg to a land mine in Afghanistan, Cormoran Strike is barely scraping by as a private investigator. Strike is down to one client, and creditors are calling. He has also just broken up with his longtime girlfriend and is living in his office.

Then John Bristow walks through his door with an amazing story: His sister, the legendary supermodel Lula Landry, known to her friends as the Cuckoo, famously fell to her death a few months earlier. The police ruled it a suicide, but John refuses to believe that. The case plunges Strike into the world of multimillionaire beauties, rock-star boyfriends, and desperate designers, and it introduces him to every variety of pleasure, enticement, seduction, and delusion known to man.

The Cuckoo’s Calling follows Cormoran Strike, a private detective as he looks into the supposed suicide of Lula Landry, a famous young model, who despite having it all appears to have jumped from the balcony of her Mayfair penthouse

This is definitely what you would call a #LateReview. A Cuckoo’s Calling has been on my TBR for quite some time – as in years and years, I liked the idea of it when I first heard it was published, and then a few months later it became one of the most hyped books of the year when it was revealed that Robert Galbraith was a pseudonym for J. K. Rowling and it was straight on my to read list, a book in one of my favourite genres by one of my favourite authors – a must read! I started reading this book about a year after it was first released and made it almost 80% of the way through before I really went off reading books on my iPad, it had been sitting unfinished on my Goodreads list for a couple of years before I picked up a copy at the library to finish it off. Despite it being so long since I’d read it it quickly came back to me as I was reading.

The two central characters in the book are the private eye Cormoran Strike, the private detective, and Robin, his secretary. I felt that Strike fell smack bang into the stereotype of the flawed private detective, but for me that didn’t take away from the enjoyment of the character, he’s gruff, he swears a lot, and he’s had a bit of a rough ride in life, but he gets the job done. Robin I was less sure about to begin with, she irritated me a little when she was first introduced, but she grew on me as the book progressed and by the end I was pleased she stuck around.

The plot wasn’t groundbreaking, character A seems to have committed suicide, character B is convinced everyone else is wrong and they were murdered and enlisted the help of a private detective to investigate the case. However I really enjoyed it, it’s well written, I liked Cormoran’s, and to a smaller extent, Robin’s character development, and I enjoyed the additional characters. There was a twist at the end that I didn’t completely see coming so that’s always a plus!

Would I recommend it?

I doubt there are many crime/mystery fans out there who haven’t already read this one but I would recommend it to anyone who hasn’t. A Cuckoo’s Calling is a solid start to the Strike series – I’ve got a couple to catch up with before the 4th book is published, probably some time this year. I also believe a TV series is in the works which should be interesting!

Other books in the Cormoran Strike series – Via Goodreads