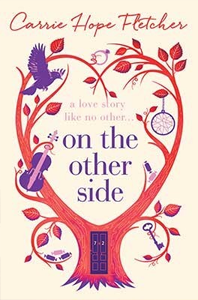 Title: On The Other Side

A love story like no other, this is the debut novel from Carrie Hope Fletcher, author of the Sunday Times No. 1 bestseller All I Know Now.

Evie Snow is eighty-two when she quietly passes away in her sleep, surrounded by her children and grandchildren. It’s the way most people wish to leave the world but when Evie reaches the door of her own private heaven, she finds that she’s become her twenty-seven-year-old self and the door won’t open.

Evie’s soul must be light enough to pass through so she needs to get rid of whatever is making her soul heavy. For Evie, this means unburdening herself of the three secrets that have weighed her down for over fifty years, so she must find a way to reveal them before it’s too late. As Evie begins the journey of a lifetime, she learns more about life and love than she ever thought possible, and somehow , some way, she may also find her way back to her long lost love . . .

On the Other Side will transport you to a world that is impossible to forget. Powerful, magical and utterly romantic, this is a love story like no other from everyone’s favourite ‘big sister’, Carrie Hope Fletcher.

On The Other Side tells the story of Evie Snow, a woman forced by her family to marry for practicality rather than love, whose soul is too heavy to pass into heaven. So I didn’t really read the blurb before requesting this one on NetGalley – If I had maybe I wouldn’t have requested it. I made my way through it relatively quickly one Sunday, but unlike some books I’ve read in a day it was more I wanted to get it over with rather than I couldn’t put it down.

I’ve read a few books that would be considered Chick Lit this year that I’ve really enjoyed, I don’t follow Carrie on social media but I’d heard a lot of hype about this so when I saw it on NetGalley ahead of its paperback release I requested it. I was pleased to be approved for it but when I got round to reading it I struggled with it. I wasn’t keen on the main character being a ghost, I’ve read and enjoyed books where hints of supernatural/fantasy have been mixed in with the a different genre in the past but for me here it just didn’t work.

However I think my main bugbear was the fact I couldn’t place the story either in a time or place. Carrie is British but I read this as being set in New York, I’m not really sure why other than I associate apartment blocks with doormen as an American thing. It was being unable to place it in time that really irritated me though, I began my assuming that Evie’s passing was based in the present day, with the flashback chapters being set sometime around the 50’s. The sexist attitudes at the paper Evie works at seem to fit this period, and I could still see an arranged marriage happening between two wealthy families were they could both see the benefit of a union, but then a month or so later Evie’s brother arrives and seems to be talking to her on a mobile phone which really jarred me out of the story.

There was another section around her wedding day, that I won’t go into too much detail in but suffice to say even having suspended my disbelief, and accepted the fact Evie was a ghost for a large part of the story, had me pull up and just think okay that’s pushed me too far and just seemed ridiculous.

I was pleased Evie got her happy ending but not as pleased as I was to turn the final page.

Would I recommend it?

It’s hard to say, there’s so many positive reviews people obviously love it and I went into it really wanting to like it but for the reasons above it just wasn’t for me